Subscribe
Buying a Fletcher Living home is a life-changing experience for our homeowners. They share their stories with us time and again, and that got us thinking…what about the tradesmen and women who put their heart and soul into building our brand-new homes?  What are their stories?

We found one remarkable tale that uplifted us all. It began in 2001, when a 19-year old Afghani man left his young wife and child in the care of an uncle and fled the horrors of Kabul to find a future away from the Taliban.  His name is Amin Ahmadi.

After months of travelling, he found himself along with 433 other refugees onboard an Indonesian 20 metre fishing boat, the Palapa 1. He had no idea where they were headed or how much danger he was in.

Hopelessly overloaded and with little food and water, the Palapa 1 broke down and began sinking in international waters about 140KM north of Christmas Island. Alerted by a distress signal, the containership MV Tampa en route to Singapore from Fremantle came to their aid and so began a saga that became known as the Tampa Affair.

Amidst all the international wrangling, the refugees and young Amin were taken by the Australian Navy to the Island of Nauru where the Australians had two detention camps. Things looked really bleak.

A lifeline from New Zealand

After one month on Nauru, Amin’s luck changed when he, along with 150 refugees, was granted asylum by New Zealand. Amin soon found himself in chilly Christchurch, but he was so happy to be safe, and immediately enrolled at Polytech to learn English.

Eager to earn some money to bring his family over to New Zealand, Amin went for an interview with a local gib stopping company after class with one of his refugee mates.  The boss gave his burly mate the job and then looked Amin up and down and shook his head. “Sorry, but you’re too skinny, you’ll never be able to lift the equipment.” He said.

Amin replied he would work for two weeks and if the boss wasn’t happy, he wouldn’t have to pay. The boss begrudgingly agreed, and Amin raced to his flat and started doing push-ups so he could handle the sanding machine. 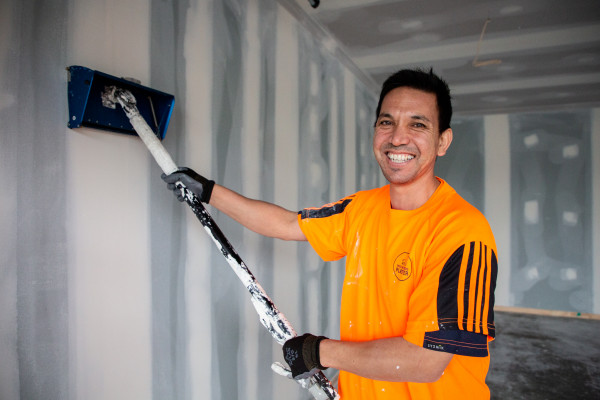 No stopping with hard work

That two-week trial turned into a life-time career for Amin. He quickly mastered the art of gib stopping and in 2004 moved to Auckland where there were more opportunities for the young gib-stopper. He soon found work on a high-rise development and put in long hours to save up enough to finally bring his family to New Zealand. A year later, there was more joy as they welcomed another child – this time a boy.

In 2018, after years of working as a sub-contractor, Amin started his own gib-stopping company. He called it OMID Interiors, which means ‘Hope’ in Farsi. 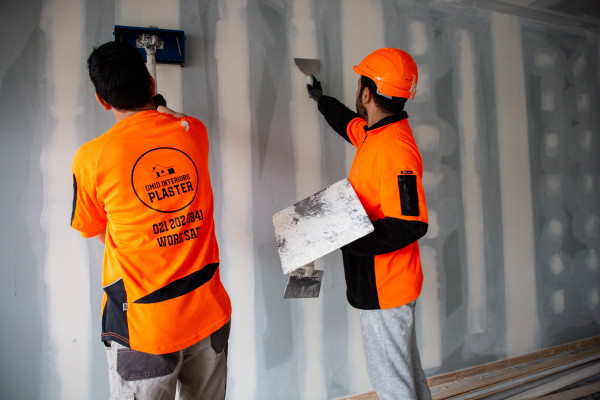 “Everyone is friendly, especially the site supervisors and I like working with them.” Says Amin. With a crew of his own, he is often Fletcher Living’s first port of call for gib stopping services. There’s a care and perfection in his work that is hard to find. Amin says he always tells his staff to treat the home as if were their own, always making sure the job is done well.

With success comes opportunity and Fletcher Living’s construction team is keen for Amin and his team to extend their skills to painting. Growing these skill sets makes a lot of sense as the relationship between painter and gib-stopper is a natural one and the two processes need to dovetail seamlessly.

Today, Amin’s children have grown up as Kiwis, his daughter is currently training to be a nurse and after 15 years living in a Housing New Zealand home, they have finally been able to purchase a home of their own.

Amin says the journey, the risk, the work - it’s all for his family so they can do better in life and he finishes with an Afghani saying:

“When you are single, you are the best. But when you have children you are second best.”

So, when you look at the walls in your new Fletcher Living home, don’t just think of them as a blank canvas for your artwork to hang.

They are far from blank. They are story of hope, new life and of the enduring love for family.