They say negativity sells newspapers and if you scan the headlines, you could pick up an entirely pessimistic view of the New Zealand housing market.

For example, Newshub recently ran a headline that read “New Zealand house prices have largest quarterly drop in over a decade – QV”.  Now while that’s factually correct, the actual figures showed the average home decreased in value by -0.6 percent nationally over the past three-month period to the end of March. This is actually within the margin of error and follows a consistent period of high growth!

To find some clarity, we’ve looked at what industry experts are saying to help give home buyers a clearer perspective of what’s going on in the economy and how those factors could affect house prices.

1. Money supply. Banks have been a little reluctant to loan money out – particularly since 1 December 2021, when amendments to the CCCFA (Credit Contracts and Consumer Finance Act 2003) came into force. However, by 14 January, the Government had responded to widespread criticism and announced an investigation into the changes made to the CCCFA and the implications of these. In March 2022 the Government announced some proposed changes, which we hope will soon see customers having easier discussions with banks about borrowing for housing.

2. Job security. With New Zealand’s unemployment at a record low of 3.2% in February, the labour market is remains very tight. Businesses are struggling to find the workers they need so are keen to hold on to existing staff, and that could even signal pay rises – even if it’s just enough to cover rising inflation. This may give buyers further job security and confidence to buy.

3. Investors steady. According to Crockers’ Property Management  April survey, only 20% of investors said they were contemplating selling a property in the next 12 months. That’s the lowest figure since June 2021 and down from 27% in January 2022.

4. Borders open. With New Zealand’s borders now open to 60 visa waiver countries, many are hoping to see migration picking up again, albeit it is expected to be slow at first. With pent-up demand due to the border closures, there is likely a backlog of immigrants coming through, coupled with NZ being a highly desirable place to call home these two factors that potentially could see the demand for housing increasing.

5. More choice. Realestate.co.nz shows there are approximately 70% more homes on the market in May 2022 than in the year prior, which, it bears remembering, was a very abnormal year. This gives buyers more choice and less fear of missing out which has been a major driver in the past. A more relaxed buying environment, with less pressure, can be a good thing for buyers.

6. Building costs. Building material costs continue to be impacted by global supply chain issues and the flow-on effects of the war in Ukraine. These conditions will continue to apply inflationary pressures on the cost of building a new home in NZ and we are unlikely to see a reversal of this trend until supply chains revert back to normal.

7. Set Price. We are starting to see more prices advertised on properties now as more people move away from auctions and multi-offer bids. Fletcher Living’s ‘known’ pricing structure can offer buyers greater certainty when seeking loan approval with their bank.

8. Healthy Homes Standards. Older rental stock is often expensive and time-consuming to bring up to the new Healthy Homes standard. Our new Investor Ready Homes are built to be compliant with these new standards, making investing in a brand-new Fletcher Living home an easy choice

9. Quality focus. More choice means more time to compare and consider your options.  Take the time to check out the build quality differences, the guarantees, and the reputation of the developer (particularly if buying off-plan).  There are some obvious benefits of a brand-new home in contrast to a resale home.

10. Bricks and mortar. Property consistently performs well over time as an investment. There may be ups and downs but average asking prices have more than doubled in the last decade according to data from realestate.co.nz, for 10 of the 19 regions across New Zealand.  Vanessa Williams, spokesperson for realestate.co.nz says; “Property has long been considered a good investment, and the latest data supports that theory.”

“In 2012, the national average asking price for a home was less than half a million dollars at $447,040. We have seen this average increase steadily over the last ten years to reach just under $1 million in 2021.” 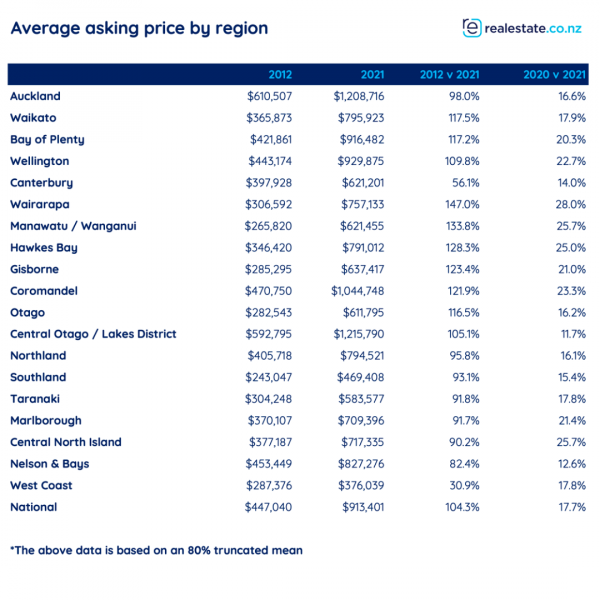